The BLM's Grants Pass Resource Area has proposed a massive timber sale sprawling across 200,000 acres in the lower Applegate River, the Illinois River near Selma, and the Rogue River area from Graves Creek to Galice. The BLM has named this timber sale Pickett West. The portion of the timber sale proposed in the Applegate Valley is located within the Applegate Adaptive Management Area (AMA). The AMA was designated in the Northwest Forest Plan to promote community collaboration, innovation and experimentation in land management projects. The goal of the AMA is to implement a collaborative process steeped in the local community. The AMA was intended to promote a collaborative, community-driven process of identifying goals, outcomes and objectives for land management projects in the Applegate Watershed.

At this time, the BLM has failed to respond to numerous requests from the Applegate Valley community encouraging collaboration in the Pickett West Timber Sale. We have asked the BLM to conduct land management planning through the framework of the AMA. The BLM's silence and unwillingness to respond to the requests of various community members demonstrates a lack of commitment to the Applegate Valley community, to collaboration, and to the AMA and its stated objectives.

Despite the BLM's lack of engagement, the Applegate Neighborhood Network, Klamath Forest Alliance and the Siskiyou Crest Blog have joined forces to support an initial survey of Pickett West timber sale units in the Applegate Valley. I recently visited large units at the headwaters of Rocky Gulch and Miners Creek, above Missouri Flat and North Applegate Road. This area has been proposed as a portion of the Applegate Ridge Trail (ART), a long-distance hiking trail connecting the towns of Grants Pass and Jacksonville, Oregon.


I began by traversing the headwaters of Rocky Gulch. The watershed is steep and as its name implies, very rocky. My route followed the proposed Applegate Ridge Trail into units proposed for logging in the Pickett West Timber Sale. The unit is large and diverse, extending across the headwaters and reaching into the east and west forks of the stream.


The west fork of Rocky Gulch is steep, rugged and riddled in low outcrops, rock mulch and scree-like soils, supporting large fire-generated stands of live oak and madrone. The dense canopy of hardwoods is punctuated by groupings of large pine and fir.

In the 1930s the ridgeline extending from Grants Pass to Jacksonville, including Rocky Gulch, burned in a series of fast moving fires. These large fires have shaped the nature of vegetation in the Applegate Valley, creating a mosaic of forest, woodland, grassland and dense chaparral. The Rocky Gulch watershed also burned at low-severity in the 1987 Savage Creek Fire, reducing fuel and maintaining healthy stand conditions.

The east fork of Rocky Gulch is highly diverse and uniquely beautiful— it will be a highlight of the Applegate Ridge Trail. The area supports spectacular old-growth forest; however, it is also a large timber sale unit proposed by the BLM in the Pickett West Timber Sale.

Large rock outcrops line the headwaters of Rocky Gulch's east fork. The outcrops rises to the ridge, broken by isles of brush, small grassy clearings, open-grown bigleaf maple, and large black oak. The habitat is diverse, dynamic and highly scenic. Views extend across the pastoral Applegate Valley, its rugged, jumbled foothills and the high peaks of the Siskiyou Crest.

Just below these outcrops lies an exceptional stand of old-growth Douglas fir. The stand is open and spacious, with large, bigleaf maple and ancient, wide-branching madrone. Massive and blackened fir trunks, underburned in the 1987 Savage Creek Fire, create a towering green canopy.

The massive old trees with their thick, corky bark, high canopies and wide spacing have grown through droughts and fires, and windstorms, and all forms of calamity. Through the adversity, the stand has developed all the characteristics of healthy old-growth forest, including: a multi-layered canopy, massive old conifers, snags, hardwoods, large downed trees, structural complexity, a legacy of natural disturbance and spatial heterogeneity.

The forest is naturally fire resilient and highly diverse. It provides Nesting, Roosting and Foraging (NRF) habitat for the Northern spotted owl and intact habitat for the Pacific fisher. It also provides a very enjoyable recreational experience to hikers on the proposed Applegate Ridge Trail. The value of this particular forest standing, is far greater than the value of the two-by-fours it would produce. The late-seral habitat in the upper forks of Rocky Gulch should be deferred from treatment in the Pickett West Timber Sale.

The proposed units in Miners Creek could be logged responsibly, to reduce fuels and provide ecological benefit if care is taken during thinning operations, and with community collaboration and input. Miners Creek includes numerous old plantation stands, planted at high density; they represent some of the most altered ecosystems on the landscape and the most dangerous fuel loads. The unnaturally homogeneous nature of these plantation stands could be broken up; removing some merchantable trees, reducing fuel loads and excessive stand density. Many nearby stands, although not clear-cut, have also been heavily impacted by previous high-grade selective logging. Many of these stands could also benefit from treatments aimed at retaining the stand's largest trees, reducing fuels, maintaining biodiversity and building resilience.

The Pickett West planning process, done through the National Environmental Policy Act (NEPA), gives us a unique opportunity to propose non-motorized hiking trails within the project area. For five years the Applegate Trails Association has been developing a plan for the Applegate Ridge Trail (ART), and Pickett West gives us the opportunity to push for approval of the western portion of the trail, or the West ART. Currently Applegate Trails Association is awaiting approval of the East ART, which has a completed Environmental Assessment (EA) with the Medford District BLM. Trail work could begin as early as February on the East ART. To help complete the trail from Jacksonville to Grants Pass, let's keep the importance of non-motorized recreation at the forefront of the Pickett West project and show support for the West ART trail during the planning process. The ART Trail will serve the heart of the Applegate Valley once completed.

Please contact the Medford District BLM and ask them to:

In the aftermath of the Trump election, those of us who care deeply about the environment need a little good news. Yesterday, we got a double dose of much-welcomed good news! 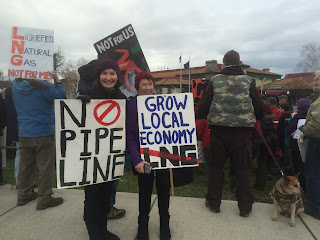 Yesterday, the Federal Energy Regulatory Commission (FERC) announced they will uphold their denial of the Pacific Connector LNG Pipeline. In March, FERC denied permits for the Pacific Connector LNG pipeline and Jordon Cove export terminal; however, the company appealed the decision and the project was left with an uncertain fate. Yesterday's announcement from FERC is very encouraging and sets a strong precedent for future pipeline proposals.

The Pacific Connector LNG pipeline and Jordon Cove export terminal is proposed to begin in Malin, Oregon in the Klamath Basin, east of the Cascade Mountains, and travel 232 miles to Coos Bay, Oregon. The pipeline would require a ninety-five foot clearcut. The three foot wide natural gas pipeline would cross 157 miles of private land, requiring the use of eminent domain. It would cross 400 streams, including the Rogue, Klamath, Umpqua, Coquille and Coos Rivers, and transport 1.2 billion cubic feet of fracked gas per day. The pipeline would also require a new 420 megawatt power plant used solely to facilitate the export of fracked Canadian gas shipped by massive tankers from the tsunami zone off the Oregon Coast on the North Spit of Coos Bay. The proposal is potentially disastrous to nearly everything in its path and has been strongly opposed by the citizens of Oregon for many years.

Despite this very good news, we must keep in mind that Jordon Cove and Pacific Connector Pipeline will likely take this decision to the court of appeals, the US Secretary of Commerce, or simply refile the project at a later date. It's not over yet and we may have to keep working to stop this pipeline for a long time ahead.

The good news for the No LNG campaign follows on the heels of the good news for water protectors fighting the Dakota Access Oil Pipeline (DAPL) in North Dakota. The Standing Rock Sioux Tribe, indigenous activists, water protectors at the camps, and allies from around the world are cautiously celebrating the news that the U.S. Army Corps of Engineers announced it will not approve an easement needed to permit the Dakota Access Pipeline to drill under Lake Oahe. The Army Corps said it would look for alternative routes for the $3.7 billion pipeline, possibly leading to a full environmental review through an Environmental Impact Statement (EIS).

Under the Trump administration we must stay vigilant for all environmental, social justice and climate change issues.


For now we celebrate these victories!

The Rogue River-Siskiyou National Forest has money budgeted to buy this parcel from the PCTA in the next fiscal year through the Land and Water Conservation Fund. The agency has long identified Donomore Meadows as a critical acquisition, but the landowner was not willing to wait for the lengthy federal acquisition process to proceed.

As a non-profit partner, the PCTA stepped in and acquired the property as an interim measure. It is expected that the land will be transferred to federal ownership and added to the Rogue River-Siskiyou National Forest in the near future.

Donomore Meadows provides critical habitat for many species that rely on high elevation meadows: from deer and elk, to black bear and cougar, to native bees and butterflies and other pollinators. The grassland and wildflowers of Donomore Meadows, the natural springs that feed Donomore Creek, as well as the surrounding forest, all add up to a wonderful place to walk through on the PCT, as well as a key place for land acquisition to add to the value of public land in the Klamath-Siskiyou.

I am proud to say that in my region public land is expanding rather than being privatized and sold to the highest bidder as some propose. We need to keep working to acquire important parcels on the Siskiyou Crest for conservation interests, rewilding the incredible land bridge and expanding our public land base, one parcel at a time.