With its headwaters nestled in the eastern portion of the Condrey Mountain Roadless Area, Studhorse Creek flows north from the Siskiyou Crest. It is a land of dry meadows, corn lily fields, schist bedrock and spectacular ancient forest. The stream was named in 1855 following the Humbug War on the Klamath River. It was late July and a group of three Shasta Indians were visiting the community of Humbug Creek. During their visit the Indians had done some trading for a bottle of whiskey and proceeded to become intoxicated. As the Indians left the settlement a miner by the name of Peterson inquired as to how they had acquired the whiskey and attempted to take the bottle from the inebriated Indians. When the Indians refused, Mr. Peterson drew his revolver and shot one of them in the abdomen. The Indians responded by shooting and killing Mr. Peterson.

The next day a "volunteer regiment" organized to find the "guilty" Indians. They captured three Indians who refused to answer their questions and began forcibly taking them to Yreka for trial. Two of these Indians escaped from custody, while a third was brought to Yreka and released due to lack of evidence. The two escaped Indians, afraid of retaliation from the volunteers, returned to their tribe and formed a war party. That night they marched down the Klamath River from Little Humbug Creek to Horse Creek, killing eleven miners and burning many cabins before fleeing over the Siskiyou Crest.

In response the volunteer regiment indiscriminately killed twenty-five peaceful Indians along the Klamath River in retribution, including women, children, and elderly tribal members. The peaceful Indians were either shot, hung or thrown alive into mine shafts. Meanwhile, the fleeing war party, which had fled north, reached what is now called Donomore Meadows, atop the Siskiyou Crest, where they killed a Frenchmen named Donomore and a Portuguese miner named Silvee. Supposedly Silvee was at Donomore Meadows helping Mr. Donomore build a barn with the aid of Silvee's horse. The Indians attempted to take Silvee's stallion but apparently it could not keep up. They shot the horse with numerous arrows and left the horse for dead. A few days later local miners found the horse on the north slope of Condrey Mountain in a canyon they then referred to and named Studhorse Creek.

Recently I made my way up to Studhorse Creek to explore the canyon and visit the Studhorse tree, a massive, old incense-cedar with the largest diameter in the world. Wallace Robinson and Loran Cooper identified the tree in 1947. It was officially measured by Oliver Matthews in 1954 and declared the largest diameter incense-cedar in the world. This enormous, old incense-cedar was later determined to be—or thought to be—two trees that fused at the base, rather than one stand-alone tree. This disqualified the tree from the champion tree register, but does not take away any of it majesty. Measuring nearly 13' Diameter at Breast Height (DBH) at its fused truck, the tree towers to over 140' tall. There are massive burls at the base of the tree and it forks into two very large trunks roughly 13' from the ground.

Incense-cedar distribution extends from small, disjunct populations in northern Mexico at the southern extent of its range, to a stand on a rocky island in the Deschutes River at the northern extent of its range. Despite this vast distribution, the largest incense-cedar in the world are found in the Klamath-Siskiyou. Many large, old incense-cedar can be found in the Klamath-Siskiyou, including four of the five largest documented trees in the world, as well as the current champion tree found in Devils Canyon in the Marble Mountains Wilderness.


Incense-cedar trees are extremely variable and can be found growing in harsh, rocky sites, in canyon bottoms or in meadow margins. Many of the largest trees are found in the little cirque basins atop each tributary of the Siskiyou Crest. The Siskiyous have many of these hidden gems that are relatively unknown and many yet to be found. Places like the Siskiyou Crest and the Condrey Mountain Roadless Area need permanent protection for many reasons, including some of the world's largest trees and most diverse conifer forests. The Studhorse tree and the forest that surrounds it should be protected from logging, road building and development as a portion of the Condrey Mountain Wilderness Area in the larger Siskiyou Crest National Monument. These proposed designations would preserve the connectivity of the west coast's most important land bridge: the Siskiyou Crest. Connecting the Coast Range to the Cascade Mountains, the Siskiyou Crest is a hotspot for biodiversity and a haven for wilderness habitat. For the wildlife and all the wild places in the Siskiyou Mountains, join us as we work towards permanent protection for this special place. 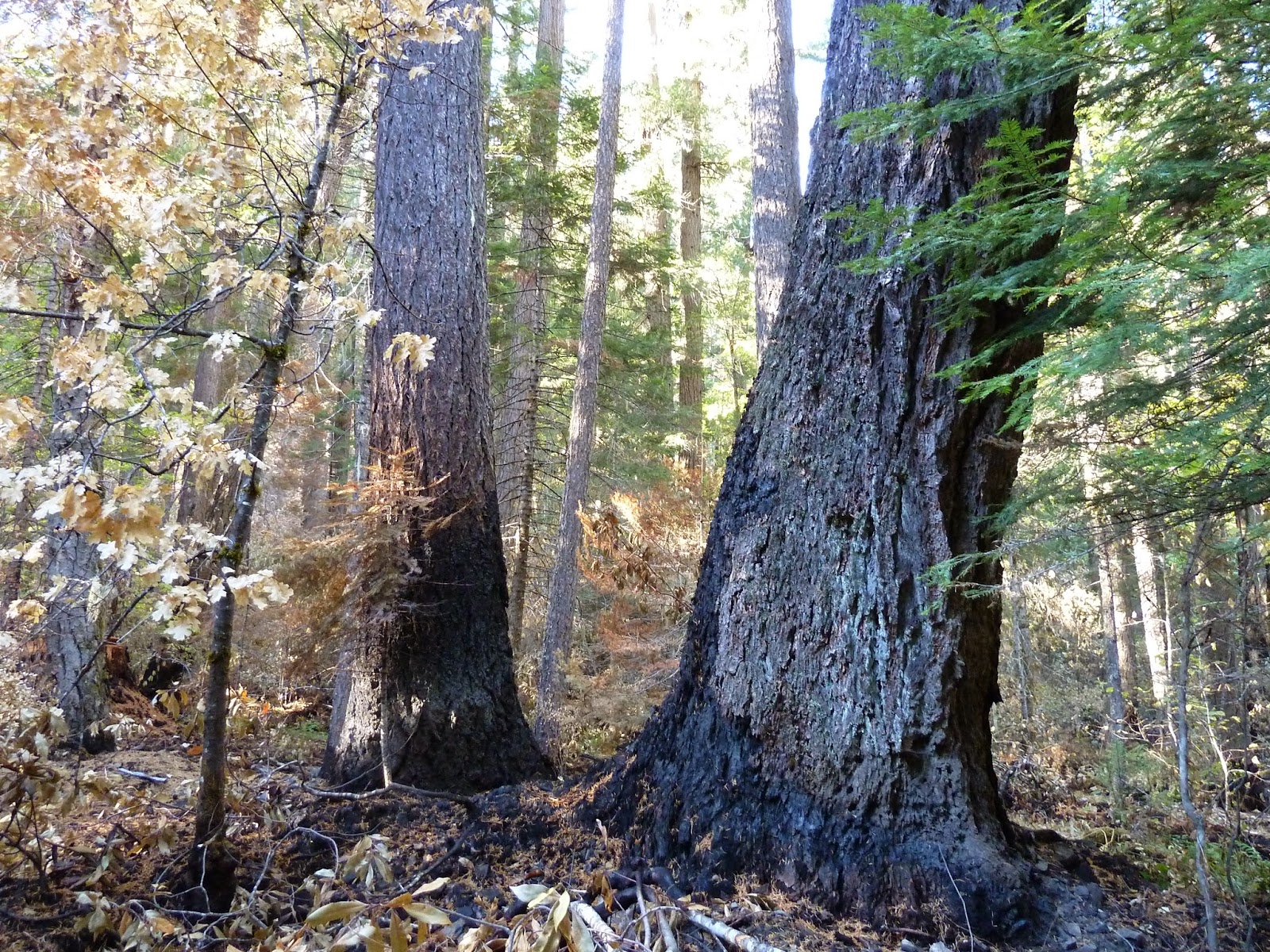 Course Description
This course will use the 2012 Hello Fire as our classroom. The fire is a wonderful example of low to moderate intensity fire that has been allowed to recover naturally. Course participants will explore the old-growth forests of the Butte Fork Canyon. Topics covered will include fire management, wildland fire use, minimal impact fire suppression tactics, post disturbance response and recovery, as well as stand development and dynamics in mixed-conifer habitats.

Posted by luke ruediger at 10:33 PM No comments: