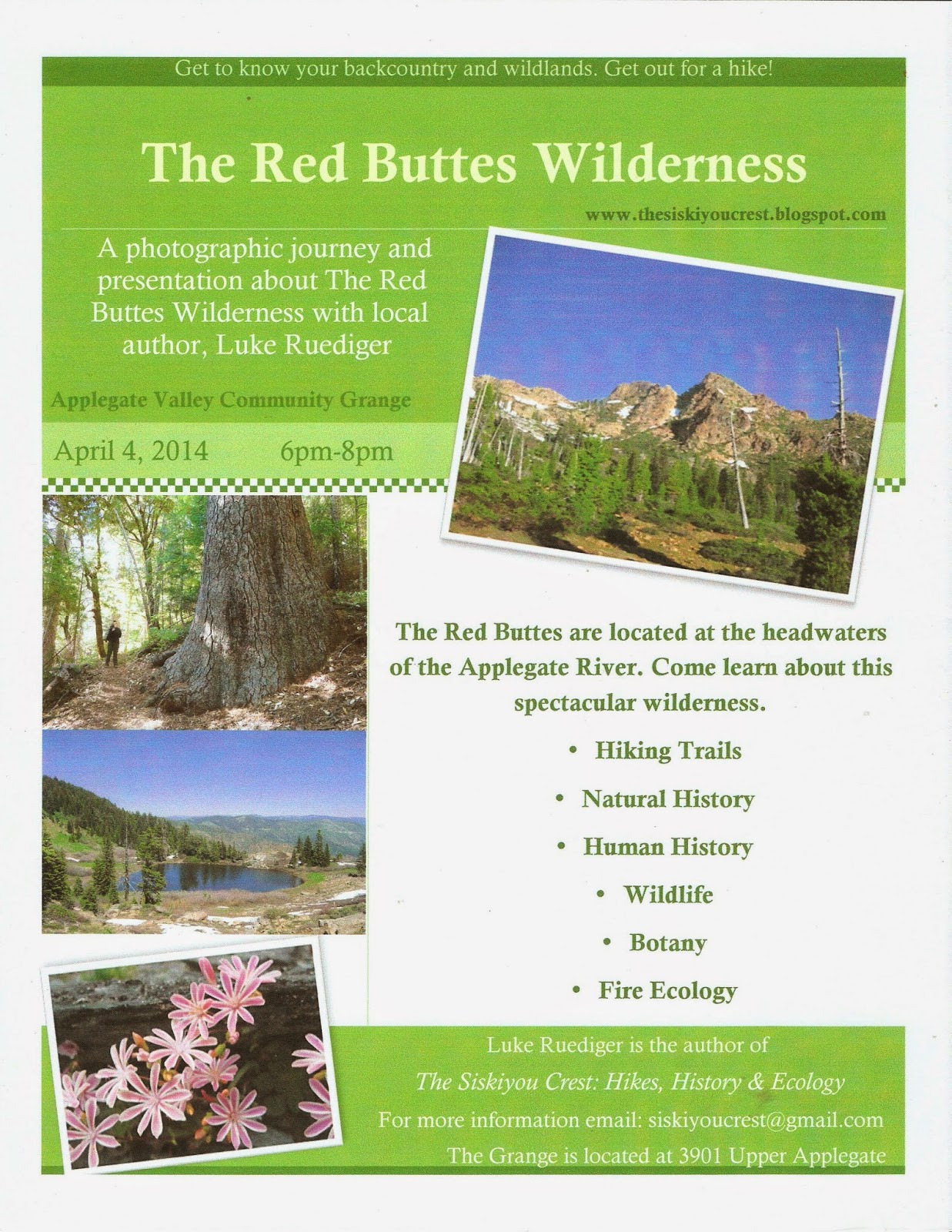 Posted by luke ruediger at 7:26 PM No comments:


For many years now the Mt. Ashland Association (MAA), owners of the Mt. Ashland Ski Area, have proposed expanding their operation by building new ski runs and chair lifts in the McDonald Peak Roadless Area and the municipal watershed for the town of Ashland, Oregon. The expansion would include over 70 acres of new ski runs, clear-cut into old-growth forest at the headwaters of Ashland Creek. The area in question includes numerous rare plant species, including Henderson's horkelia (Horkelia hendersonii), the Siskiyou Mountains' only stand of Engelman spruce (Picea engelmannii), and the world's only population of the Mt. Ashland lupine (Lupinus lepidus var. ashlandensis). The forest is also home to the rare Pacific fisher.

Serious issues of slope stability, as well as impacts to water quality, connectivity and wilderness quality habitat would follow any development into the wild and fragile Middle Branch of the East Fork of Ashland Creek. With the ski expansion currently approved by the Forest Service and nearly all legal avenues exhausted, the only hope for a wild Mt. Ashland may be for the existing ski resort to either fail to generate the funds needed for expansion, or for the ski resort itself to go out of business, forcing the plans to be dropped all together. A timely natural catastrophe for the MAA could be more effective than all the efforts of environmental activists and organizations combined. If mother nature cooperates by refusing to snow, she could very well save the McDonald Peak Roadless Area from destruction. Unfortunately, the situation leaves me praying for drought and a low snow pack.

As the Siskiyou Mountains wait for a significant winter snow pack, the high summits of the Siskiyou Crest remain virtually snow-free. Mt. Ashland is the highest summit in the Siskiyou Mountains, at just over 7,500'. As I write this blog post the mountain has a mere 16 inches of snow and the ski resort has yet to open for business due to the lack of snow. It seems possible that the resort will not open at all this season, and it has already surpassed the previous latest season opening of February 17, 1977. The situation has stressed the already marginal ski resort financially. General manager Kim Clark recently made the following comments, regarding the lack of snow on Mt Ashland, to the Ashland Daily Tidings: "It could potentially close the area. Could any business survive a year without income? We continue to watch our reserves dwindle."

Bad news for the ski resort is good news for the Siskiyou Mountains. The difficult financial situation demonstrates the resort's precarious existence and the mountain's relatively poor location for a downhill ski resort. Given the financial and climatic realities expansion should be out of the question, especially when the new runs would extend to significantly lower elevations. The Siskiyou Mountains' tendancy for extended drought and minimal winter snow pack has plagued the ski area now for 50 years, leading to three past bankruptcies. Climatic conditions have historically played a major role in the viability of the resort and will continue to do so in the future, especially as we feel the increasingly pronounced impacts of climate change.


Within the last couple years it looked as though the ski expansion would move forward. The MAA threatened to begin clear-cutting the new runs and develop the expansion area in a phased approach while they raised funds to implement the project piece by piece; however, this approach would leave the association vulnerable to an over-extension of financial resources, especially given poor winter snow conditions. The worst case scenario predicted by many expansion opponents could very well have come true during this time. The expansion could have been partially implemented, the roadless area heavily impacted, an ancient forest lost, and the ski resort bankrupt, leaving lasting and irreversible impacts to the McDonald Peak Roadless Area, the biodiversity and connectivity of the Siskiyou Crest, and the municipal watershed. Luckily this hasn't happened yet.


Instead of full-fledged expansion the association implemented a series of "improvements" this summer and fall, including the development of a large number of new parking spaces, re-contouring of the beginner's run, and widening of the existing runs by logging many large, old trees. The project went nearly $200,000 over-budget and the MAA is currently trying to recoup losses with a fund raising campaign based on financial donations.


The Mt. Ashland Ski Area has also sold over 2,500 season passes for the 2013-2014 ski season, yet have been unable to offer a single day of skiing to date. Each season pass costs $289.00, amounting to over $700,000 in gross revenue. With the mountain remaining closed many season pass holders are asking for a reimbursement of funds. The Ski Area, thus far, has refused to consider that option, instead they have chosen to pray for snow and hope the mountain will open in the near future. With the MAA strapped for cash and the snow simply not materializing it is likely that the proceeds from these season passes will be kept by the MAA, having a detrimental impact on pubic relations.


This year marks the 50th anniversary of the Mt. Ashland Ski Area. Now is the time for committed activists to continue their efforts; with the MAA vulnerable we must increase the pressure, advocate for a boycott, reimbursement of season pass proceeds, and question the very wisdom of expansion in light of the financial and climatic realities. Write letters to the editor, contact City of Ashland officials, encourage the Forest Service to re-analyze the ski expansion with the new information now available regarding climate change and the resort's financial instability. Finally, as strange as it may sound, pray for drought, the future of Mt. Ashland may depend on it.

To read interesting articles about the Mt. Ashland Ski Area's financial difficulties and lack of snow visit the following:

Posted by luke ruediger at 10:06 PM No comments: