This past weekend I visited a favorite place of mine. I drove up the Middle Fork of the Applegate River to the Fir Glade Trailhead and hiked closed road #850 (aka "The Hinkle Lake Trail) into the Hinkle Lake Basin. For over a decade now I have worked to protect the Hinkle Lake Basin and the Hinkle Lake Botanical  Area from OHV abuse. The last few years have seen an increased effort by many other individuals and organizations, and now, finally, things have begun to change for the better. The turning point toward recovery has been the Forest Service's serious commitment, over the past year, to enforcing an effective motor vehicle closure for this now over 30 year-old Forest Order Closure. This has included adequate signage and notice of the road closure, gating, tank traps, and increased enforcement and monitoring. 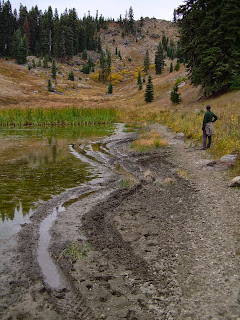 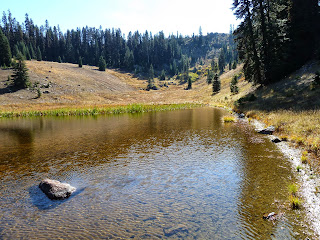 For years, the meadows and lake basin were abused by unmanaged and illegal OHV use. The wetlands around Hinkle Lake and Kendall Cabin had become mud bogs, and vehicle tracks could be found throughout the broad subalpine meadows and flower fields. I am happy to report that some of these areas have begun to heal and re-vegetate. Although the impacts to hydrology and riparian function may be more long term, this year they were not made worse with each trespassing vehicle. The last time OHVs were seen in the Hinkle Lake Basin was in June, 2013. It does not appear as if any further trespass has occurred. When I arrived there this past weekend I was heartened to see the gate locked and other hikers on the trail! 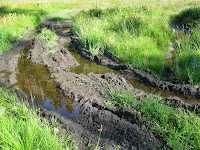 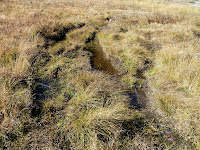 As these before and after photos show, there are visible signs of recovery within the meadows and lake margins. We have begun to make a difference, yet the struggle is not over. We still need to advocate for official designation of road #850 as the "Hinkle Lake Trail," and for inclusion of the Hinkle Lake Basin in the Red Buttes Wilderness in order to keep it protected in perpetuity. The Hinkle Lake Basin is  a wilderness caliber landscape and should be treated as such.


Please contact the following Forest Service officials and tell them you support the measures they have taken to protect the Hinkle Lake Botanical Area and encourage them continue these actions into the future.


Posted by luke ruediger at 8:35 PM No comments:

Grazing issues on the Siskiyou Crest

I recently went to the eastern Siskiyou Crest with Felice Pace from the Campaign to Reform Public Land Grazing in Northern California. Felice has been monitoring grazing allotments in the Marble Mountains Wilderness Area for numerous years and is working to reform grazing practices that are violating the Clean Water Act and degrading some of the region's most pristine high mountain springs, wetlands, and meadows.

In early September we set out across the Siskiyou Crest monitoring grazing allotments on both the Rogue River-Siskiyou National Forest and the Klamath National Forest. What we found was appalling, yet all too routine in the mountains of the west. Cattle have been overgrazing the high mountain meadows of the Siskiyou Crest for decades. Beginning over 150 years ago sheep, then cattle began overgrazing green fescue and other upland grasses in dry clearings, meadows, and grasslands. These historic impacts have reduced many dry upland meadows and grasslands to sparse and dusty clearings nearly devoid of vegetation. The productivity of these sites have been so thoroughly trampled,compacted, and overgrazed that to this day little remains of the original plant community.  This is especially evident in the schist soils near Condrey Mountain.

Current management, stocking levels and continuous summer grazing is clearly not allowing these areas to recover. The lack of available forage in upland sites is also forcing cattle to graze more extensively in wet meadow areas as very little forage currently exists outside this habitat. The trampling of springs and wetlands, the fragmentation of willow stands, and the deposition of fecal matter directly into high mountain streams has taken a heavy toll and the impacts continue to this day.

We found the most extensive damage in Alex Hole, a broad glacial bowel at the headwaters of Elliott Creek, at the eastern margin of the Condrey Mountain Roadless Area. The area is within the Elliott Grazing Allotment and was proposed in the 1990s as a designated Botanical Area by the Rogue River National Forest. It was excluded from this designation based on the following statement from the 1995 Draft Land and Resource Management Plan (LRMP): "The wet meadows are in a particularly disturbed condition. Exclusion of cattle may be a prerequisite for returning the plant communities to their former condition and the establishment of a botanical area."

Indeed, damage to wet meadows, seeps, springs, high mountains streams, and willow wetlands in the area is significant and troubling. The area is currently overgrazed and over-utilized, meaning essentially all available forage has been consumed by grazing cattle and native ungulates. The lack of forage throughout the allotment is forcing cattle to congregate in wetlands and springs. Nearly all water sources and springs have been trampled, including deep hoof prints that extend over 6" into the soft wetland soil. Stream banks are heavily disturbed, willow wetlands badly fragmented and browsed, and fecal matter litters the streams and springs. The area is being severely damaged by unmanaged cattle and inadequate herding. Cattle dispersal techniques are not being utilized and no attempt to protect these otherwise pristine water sources is being made by either the permittee or the Forest Service.

Other areas of extensive damage include Mud Spring, a particularly wet and sensitive meadow near Condrey Mountain and Silver Fork Basin in the Beaver/Silver Grazing Allotment beneath Dutchman's Peak and Observation Peak. The Silver Fork Basin has long been one of the most overgrazed meadow systems on the Siskiyou Crest. Extensive damage was done at the turn of the century and massive "range improvement projects" were conducted in the 1950s, trying desperately to grow some grass. The ridge at the head of the meadow system was so badly overgrazed and subject to such heavy erosion that the Forest Service terraced the slopes to stabilize the gullies which were forming. Watering systems were put in place and non-native grasses were seeded. Yet rather than provide the region with a much needed rest, cattle remained in the basin, eating forage as fast as it could grow. Today conditions are somewhat better but stocking levels are compounding the impacts of the past and disrupting recovery in this dramatic meadow basin.

The impacts at Mud Spring are inflicted by a combination of grazing and inappropriate OHV use. The wetland is badly trampled and riddled with OHV tracks. A small spur road leading to the springs should be closed to vehicle use to reduce impacts to hydrology, vegetation, and water quality.

On the Klamath National Forest side of the ridge we also found extensive damage to wetlands, seeps, and springs in upper Jaynes Canyon, Cow Creek Glade, Buckhorn Springs and Reeves Ranch Spring. Reeves Ranch Spring has had protective fencing and water developments projects completed in the past, seeking to reduce or eliminate grazing impacts to springs, however, these have been neglected and made entirely dysfunctional through a lack of maintenance. Public funds utilized to build this protective fencing and develop water sources away from sensitive springs have been wasted and the infrastructure is in disrepair.

In response to our monitoring reports the Forest Service sent the RR-SNF grazing specialist, Mark Hocken, out to inspect the allotments. His conclusion was that production of forage across the Siskiyou Crest was 1/4 to 1/3 of the normal seasonal growth due to abnormally dry weather conditions. He asked the permittee on the Beaver/Silver Allotment to move their cattle from the Silver Fork Basin to allow recovery and facilitate a more even distribution of cattle across the sprawling allotment. He also recommended a meeting with the grazing permittee to discuss the distribution of cattle, the use of salting, water developments, and trespass issues, where cattle from the adjoining allotments stray into other allotments, creating problems of overgrazing, over-utilization, and over-stocking.

Due to significant overgrazing, over-utilization, impacts to water quality, and low production across the range this season, we have asked that the cattle be removed immediately. This will allow some recovery and re-growth in native meadow communities while also allowing the streams to heal some before next grazing season. Long-term some of these areas may need an extended period of rest to allow for adequate riparian function and the maintenance of  native plant communities. Please contact the responsible Forest Service officials and ask that they consider providing some of the most damaged areas this extended period of rest. In other areas a reduction in stocking levels, increased herding and management as well as efforts to protect waterways, springs, and wetlands are needed.

Posted by luke ruediger at 9:47 PM No comments: